Hiding Videos on the Mobile Web

Background videos, and videos that autoplay on websites are becoming more and more popular (and perhaps will soon be the new normal). It is also common to only display the video on larger screens, and to hide the video on small screens.

However, in my experience of looking at hundreds of websites on mobile and desktop – I see that many sites that do not show the video on mobile devices simply use CSS to “display:none” the videos on mobile.

Great – no video appears on the screen!  But, if you happen to open devTools, or run WebPageTest on a mobile sized screen, a horrible secret emerges: 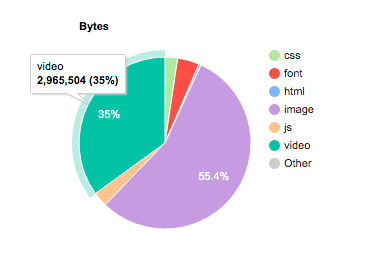 The background video is not displayed to the user, but every mobile user is downloading a significant bit of the video (in the screenshot above – nearly 3 MB of unseen, unused video!)  So what’s going on here?  Let’s look at the HTML:

So the video is set to autoplay, and is muted (for autoplay on mobile), but the video is hidden due to the CSS:

On screens smaller than 992px (my arbitrary cutoff), the video is replaced by an image placeholder.  On bigger screens – the opposite.  Curious? Here’s an example page and Mobile Chrome WebPageTest results.

This is a Problem

Mobile users are often on a constrained network or have a limited data plan (or both!).

In Japan, the web is slower towards the end of the month due to data caps, resulting in reduced engagement pic.twitter.com/rKWClaqWUD

Knowing that the one video file on your site could easily double or triple the weight of your page, and knowing that your mobile customers will never see it – we should do something to prevent this extra download from happening.

There are 2 changes to the video tag:

With no autoplay, and preload=”none”, mobile devices will not download any video at all.  So our code looks something like this:

Now, to re-add the autoplay command, we simply use JavaScript to add the attribute back if the window is over our 500px threshold:

On mobile devices, there is no autoplay, and the preload=”none” prevents the browser from downloading the video.  There is a test page, and the WebPageTest results for mobile Chrome show no video download occurs.

Instead of adding the autoplay to “larger screens” you could do the opposite: remove autoplay from the smaller screens.

Another approach is to only add the video source to screens that can play the video.  I like this approach as it gives you the opportunity to create several videos – perhaps a smaller 720p video for larger smartphones, and a 1080p (or larger) video for desktops.

Hiding video from mobile devices does not prevent the video from partially downloading – wasting megabytes of data on each page load (and potentially GB and TB from your servers!).  As developers, we should take the extra steps to prevent this data waste, and by programmatically adding the autoplay parameter based on the screen size of the device, we are able to eliminate video downloads on mobile devices that never show the video.

Test your site with WebPageTest or your favourite devTools to see if your mobile users are forced to download videos that they can never see, and then stop it from happening!