One issue that is discussed often in the web performance community is how slow websites are quickly abandoned. There are dozens of studies that show how much users hate slow websites.  But, in the sake of brevity, here are 2 (or 3):

SOASTA recently found that a 2 second delay lowers the users’ session by 51%, and increases the bounce rate by 100%.

And, my favourite stats of all time: 23% of frustrated users curse at their phones, and 4% throw them when a mobile site is slow.

I could go on, and on.  But suffice to say, fast sites are imperative to keep your customers happy.  And continuously testing, and ensuring your site is light and responsive is even more important, now that so much of web use is on mobile.  When your customers connect from a mobile device, there is no way of knowing the quality of the network that they are connected to, and if the network they are using has poor throughput – your site load time will be further impacted!

How badly are websites impacted by slow network throughput?  Let’s see what we can find out!

I used Andy Davies’ WebPageTest Google Doc (introduced here) to load a number of common websites on Moto G4s using WebPageTest to set several different throttled throughputs.  I picked websites that people might use when traveling: Google Maps, AirBnb, Twitter, Facebook, Weather, YouTube. I ran the tests at 128, 256, 512, 1024, 1536, 2048 KBPS and without a cap. I added 200ms latency to each round trip to simulate a roaming situation.  Each test took the median of three page loads per site per throttle setting.

What I found was not unexpected – on lower speed networks – these webpages took a really long time to load: 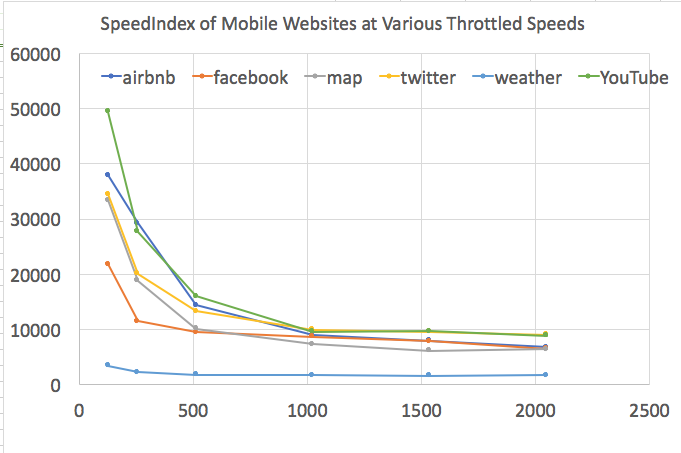 What I find interesting is that the render start, visually complete and the SpeedIndex are all pretty much the same down to 1 MBPS (generally speaking – within a half second).

The inflection point to longer page load happens around 512 KBPS. 2 links (Weather and YouTube) are about the same at 512 KBPS, but the others were 26-106% slower!  At 256 and 128 KBPS, the graph speaks for itself – the sites get SIGNIFICANTLY slower to load (and actually a number of the 128 KBPS tests actually timed out).

If your customers are trying to load your sites on a slow network, or while roaming, the research shows that you will lose a significant number of them due to the significant time it takes the page to load.  However, a light and simple site like the weather page in the tests above still manages to load in under 10s at 128 KBPS.

If you are curious, you can check out the raw data and the results from each test here.